Movie Review Much Ado About Nothing 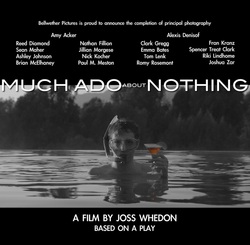 Movie Review Much Ado About Nothing

On Saturday September 8th, I attended the Toronto International Film Festival World Premier of Joss Whedon’s take on William Shakespeare’s, Much Ado About Nothing.  I admit I am a Disciple of the Church of Joss Whedon’s greatness.  I fully intended to enjoy this film going in because I do love all of Joss’s work.  But I figured it was going to be a tough sell for me due to the fact it was Shakespeare.  I have never been a great lover of the Bard’s prose, I respect it and think he was genius, but I have never gone and read any play of my own choosing.  I was blown away right off the bat with how accessible this film was and how Joss modernized the surroundings and set pieces but did not modernize the language or tone of the play.  The banter between the characters was fantastic.

Even though the play is over 400 years old I will not spoil any storyline or surprises that Joss and cast might have thrown in.  I will just say that for such an old tale it was made modern by the usage of current items, surroundings and wardrobe.

Speaking of the cast, it is a Whedonverse’s Whose Who.  You have Alexis Denisof (Buffy the Vampire Slayer, Angel) as Benedick, Amy Acker (Angel, Dollhouse) as Beatrice, Nathan Fillion (Firefly/Serenity, Buffy the Vampire Slayer, Castle, Dr. Horribles Sing A Long Blog) as Dogberry, Reed Diamond (Dollhouse, The Shield) as Don Pedro, Clark Gregg (The Avengers, Iron Man 1 & 2, Thor) as Leonato, Fran Kranz (Dollhouse, Cabin In The Woods) as Claudio, Jillian Morgese as Hero, Sean Maher (Firefly/Serenity) as Don John, Tom Lenk (Buffy The Vampire Slayer, Cabin In The Woods), Ashley Johnson (Dollhouse, The Avengers) as Margaret, Riki Lindhome (Buffy the Vampire Slayer) as Conrade, Emma Bates as Ursulla, Nick Kocher as First Watchman, Brian McElhaney as Second Watchman, Spencer Treat Clark (Unbreakable, Gladiator, Mystic River) as Borachio, Joshua Zar as Leonato’s Aid.  They were all fantastic with the real standout’s being Alexis Denisof, Amy Acker and Clark Gregg.  Reed Diamond also did an amazing job as Don Pedro. Nathan Fillion and Tom Lenk provided the comic relief. And Sean Maher was one hell of a dick.  Overall all of the actors seemed to raise their game and they all were pretty fantastic.

The film was shot in black and white and filming took 12 days.  Filming took place at Joss Whedon’s house.  His wife Kai Cole was an executive producer and I would assume the rock that kept this whole production in place.  Joss wrote, directed and produced this for his and his wife’s new micro production company Bellwether Pictures.

I can’t express enough how much I loved this film.  I was riveted for the hour and 47 minutes it was up on the screen.  I laughed a lot and I really was just engaged in the story.  I have never really understood much of the old English prose but Joss and the cast made the film accessible.  And as a fan of the television show Angel, I finally got my Wesley and Fred moment even if it was in the guise of Benedick and Beatrice.  And to make this experience even better Joss and the ENTIRE cast was there for the premier.  They got to hear our reaction and they got to see our standing ovation at the end.  They did a short Q&A at the end.  I honestly think Joss was sort of taken aback with the response to the film.  And the response was extremely positive.  I think everyone enjoyed the hell out of the movie.  I know I did.
Jason’s Rating 9.5 out of 10