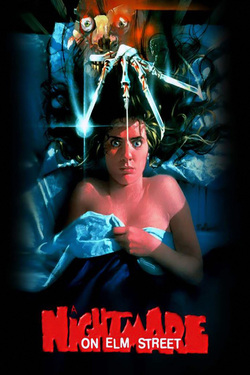 Fright Fest Fridays is a new feature to our site, which will discuss a single horror film every week.

With director Wes Craven collaborating on a new project with comic book author Steve Niles, I thought it would be cool if the first film we talked about was one of Craven’s classics.

The film A Nightmare On Elm Street(1984) is most likely the man’s ultimate classic. The film stars Heather Langenkamp and a young Johnny Depp(in his very first feature film), and Robert Englund as the iconic Freddy Krueger. Craven also wrote the film.

The film is one slasher film that looks at the horror genre and asks “what if there was nowhere left to run to or hide?” and “what if the killer could catch you in your dreams?”. This is a frightful thought indeed.

The plot focuses on young Nancy, a teenager who’s friends have just been murdered in their sleep by the Springwood Slasher, Freddy Krueger who was a child killer(and potentially a molester) who was burned to death in a fire lit by the town’s parents. Nancy starts to see Freddy in her dreams and struggles to stay awake. Her family starts to think she is going nuts.

The original A Nightmare On Elm Street features some really interesting death scenes. Especially, Johnny Depp’s which in my opinion is one of the best horror death scenes of all time.

Robert Englund does a fantastic job in the film as the kids’ tormenter and is truly menacing. His portrayal of Freddy Krueger set the bar for slashers even higher during the 1980s and is still praised as one of the greatest horror villains of all time. There’s also a little chant that is spoken during the film that became quite iconic(1, 2 Freddy’s coming for you!)

So if you’re in the mood for an old school horror film, may I suggest A Nightmare On Elm Street?