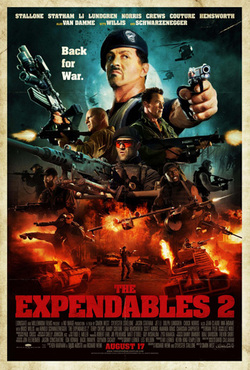 I know this film came out around 3 weeks ago but  was not able to do my review until today.  So here it is.

I loved the first movie and was anxiously awaiting the release of this film.  Let me tell you it did not disappoint.  The action was just as good as the first and the jokes and camaraderie was even better than the first. The film stars Sylvester Stallone as Barney Ross, the leader and heart of the Expendables.  Jason Statham returns as Lee Christmas, the knife specialist and Barney’s best friend and trusted right hand man.  Jet Li plays Yin Yang a hand to hand combat specialist.  Sylvester Stallone’s Rocky 4 opponent Dolph Lundgren comes back as Gunner Jensen, a hot headed big gun on the team.  Hilarious Old Spice Spokesman Terry Crews plays Hail Caesar, the heavy barrel weapons expert on the team.  And he also has the BIG GUNS.  Former UFC Light Heavy Weight Champion Randy Couture reprises his role as Toll Road, the  demolitions expert of the team. The team added a new member, Billy The Kid a sniper portrayed by Liam Hemsworth.

This film is a kick ass 80’s style action film.  It is fun, and exciting from beginning to end.  I don’t really want to talk much about the film itself but I highly recommend it to you if you have seen the first movie and if you enjoy action flicks.  While viewing this I received all that I was looking for.  I got my fan boy glee when there were inside jokes between the characters, and I loved all the action scenes.