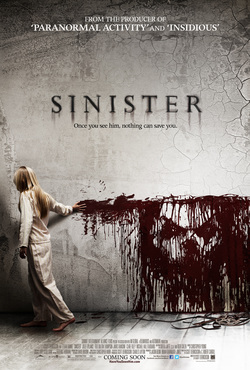 Sinister was a bit of a let down. Based on the trailers I thought this movie could potentially be tremendously creepy. The audience did receive a few jump scares but the film didn’t really do anything out of the norm. It lacked suspense and any real direction in the plot. It did, however, have a few humourous moments

The film follows a family who move to a new home because their father is a true crime writer who wants to reclaim his fame. The house they are living in was the house of a family of murder victims. It is revealed that a supernatural force, which lives in images, is behind everything. The acting was well done. Ethan Hawke contributed a decent performance as did the rest of the cast, which included Juliet Rylance, Fred Dalton Thompson, and James Ransone.

The movie wasn’t bad. It just wasn’t really good. There were a few sequences when it got kind of boring. There were also times where it seemed that it should have ended but didn’t, leading to a bit of a drag-out.