The House At The End Of The Street Review
Rating: 7/10
Excitement rating before film: 7/10 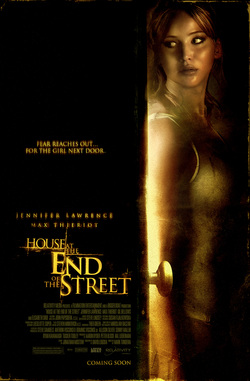 The House At The End Of The Street may not be the most original film to grace the silver screen. It is however quite entertaining.

The movie stars The Hunger Games’ Jennifer Lawrence as young Elissa, Elisabeth Shue as her mother Sarah, and Max Thieriot as Ryan Jacobson.

Elissa and her mother move into a new house after the death of their father and husband. It is revealed that two people were killed in the house next door. Their surviving son is still living in that house. It is believed that the daughter is livig in the woods. This causes other neighbours to speculate and jump to conclusions, resulting in unfavourable. Elissa begins to fall for the son(Ryan Jacobson) and eventually finds out things are not what they seem. The ending reveals a very Sleepaway Cam-esc plot twist.

The performances given in the film are fine. Each character seems likeable in their own way and the ones that aren’t likeable weren’t meant to be. I actually didn’t want any of the main characters to die which is what makes it so entertaining to watch.

The film had a good atmosphere to it and was a great random popcorn thriller but nothing more. I was glad to see that I wasn’t completely disappointed by this film.