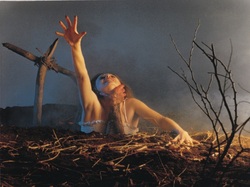 The Sam Raimi-produced horror film The Possession has hit theatres to admittedly unfavourable reviews. I wanted to take this “opportunity” to discuss the film that got him his start in the film industry: The Evil Dead.

The Evil Dead was a low budget horror film that Sam Raimi directed in 1981. It is a fun, but ridiculously stupid film that has gathered quite the cult following.

The movie follows a group of young people who travel to a cabin in the woods. They play a tape of incantations that release demons that end up possessing them.

Bruce Campbell plays the lead role of Ash who’s girlfriend and sister both get possessed. He ends up being the last one left to fend off the demons on his own.

The film’s gore and special effects are great for the time and are thoroughly enjoyable. There’s also a great(although random) scene where someone gets attacked by the trees in the woods.

Evil Dead is quite atmospheric and the camera angles and movements definitely aid the film in this area.

If you like old, cheesy, gorey, fun horror films and haven’t already seen Evil Dead, you should because it’s right up your alley.