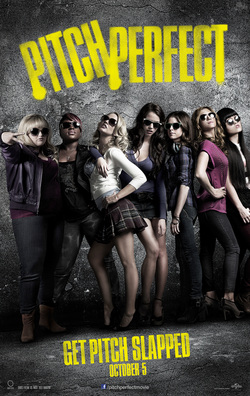 Pitch Perfect follows an all-female accapella group as they try to make it to their regionals competition and fix their reputation(that was destroyed by a rather gross debacle) by finding new members.

The group now features a group of misfits who all love music. They perform mash-ups and covers of popular songs throughout the film and try to defeat their rivals, the Treblemakers. Before anything more is said, yes it is an awful lot like Glee. The one thing that saves it from being “Glee: The Movie”is that it is slightly raunchier.

The film stars Anna Kendrick, Skylar Astin, Brittany Snow, Anna Camp, and Rebel Wilson. The film also features the like of the amazing Elizabeth Banks and John Michael Higgins who get some really great one-liners in.

The movie does tend to get a little chick-flicky at parts but that’s all good and fine. It’s actually fairly funny although doesn’t live up to it’s full potential. Rebel Wilson deserves to have her name mentioned as well because without her the film probably wouldn’t even have been as good as it was.

Pitch Perfect is a fun movie to watch with friends but was not really overly memorable.