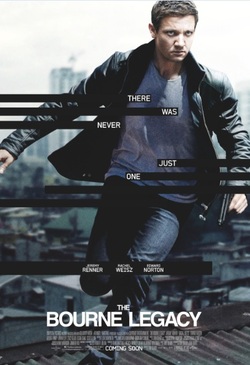 This is not Matt Damon’s Bourne, nor is this a direct sequel or a reboot.  I would call this a kind of spin off using a new character but in the same spy, Black Ops Universe.  Jeremy Renner stars as Alex Cross, he is an Outcome Operative.  They are essentially a different form of Treadstone, but instead the government has given them forms of medication to make them advanced.  It is an interesting film and it does involve a few of the characters from the Bourne series.  Matt Damon’s picture shows up but he is not in the film.  I would recommend this movie to anyone that is a fan of the previous Bourne films and also people that are fans of action films.  It is good to see Rachel Weisz back and in action.  This film rests on the shoulders of the two leads and also on the main antagonist Eric Byer, who was played by the always brilliant Edward Norton.   I did not enjoy this as much as the other Bourne films but that does not mean that I did not enjoy this film.  It was a well made action film with some spy twists.  The problem is that most of the main action and storylines were shown in the trailer.  There really were no surprises.  But that isn’t really the films fault, it was entertaining.