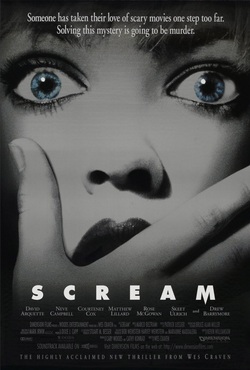 One year after the murder of her mother Maureen, Sidney is being stalked and attacked by a killer in a ghost costume(eventually named Ghostface). Throughout the story Sidney and the others(despite their differences) attempt to figure out who the killer is as their friends get slaughtered one by one.

Directed by Wes Craven and written by Kevin Williamson, Scream intends to analyze the horror genre, clearly stating that “there are rules that must be followed in order to survive a horror film”. It seems for a portion of the film that film is going to break those rules but eventually it ends up doing just as it should and follows them.

Sidney proves to be one of the best horror heroins ever as she kicks ass in nearly every scene where she is brawling with Ghostface. At the time, Scream was considered quite violent and gory. It took the slasher genre into a new territory.

Drew Barrymore also gets one of the best death scenes in the horror genre as Ghostface's first on-screen victim.


Scream became a blockbuster horror franchise and had two financially successful sequels, and one that didn’t do so well. In my opinion all four films are well done and should be taken mostly as great entertainment.