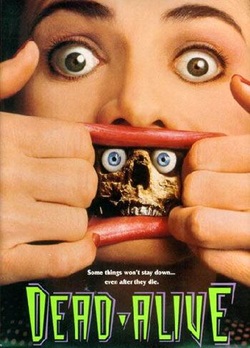 A long time before director Peter Jackson worked on his popular Lord Of The Rings trilogy he directed a little film in New Zealand called Dead-Alive.

The story of the film is that a girl is destined to meet her true love after a tarot card reading reveals so. She finds him in the form of Lionel, a man who is heavily controlled by his mother.

An infected rat-monkey(a hybrid creature) is brought to the zoo where Lionel takes the girl, Paquita Maria Sanchez, on date. Lionel’s mother finds them at the zoo but is soon bitten by the rat-monkey and infected. The scene itself is quite gorey but is absolutely hysterically weird in some way.

At home Lionel’s mother goes through a traumatic experience as her skin starts to fall off. Some really awkward moments ensue. She becomes a zombie and the viruse spreads to others such as a nurse and a priest who “kicks ass in the name of the lord!”. Somehow the priest and the nurse have a baby zombie as well.

Lionel attempts to keep everything  a secret but things start to spiral out of control and results in one of the biggest gore-fests in a horror film to date.

It’s a miracle that Lionel is able to keep the girl of his dreams after what he puts her through.

Yes, the movie is quite stupid but it can be a fun watch.