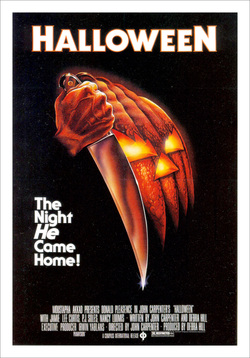 Director John Carpenter will be making an appearance this year at Toronto’s Fan Expo. I was initially going to discuss Halloween at a later date but thought “to hell with it”.

The first thing I must discuss is the classic theme music. The music, along with Jamie Lee Curtis’ performance, is what makes the film quite chilling. It creates a great sense of urgency which I feel is unparalleled in the horror genre to date. The song makes you feel scared for the young Laurie Strode(Curtis).

Jamie Lee Curtis gives us possibly the performance of her career and is still in my opinion the scream queen. Her portrayal of Laurie Strode is excellent. Most other horror heroins do not come close to what this character achieved in terms of relatability. You truly feel sorry for this girl as she is stalked by the prolific horror villain Michael Myers.

One by one Michael kills her friends as she babysits little Tommy Doyle and Lindsey Wallace.

Michael’s story himself is quite mysterious as well. In the beginning of the film the six year-old who murders his sister is sent to a psychiatric hospital where he is under the care of Dr. Samuel Loomis(played marvelously by Donald Pleasance). Loomis realizes over the years that Michael is pure evil and when he escapes the institution Loomis tries to track him down before all the madness ensues.

In my opinion this is one of the best horror films ever created. It’s eerie and was quite groundbreaking at the time of it’s release.  I think another thing that makes the film work is the love that the audience may have for most of the characters. And some really interesting death scenes.