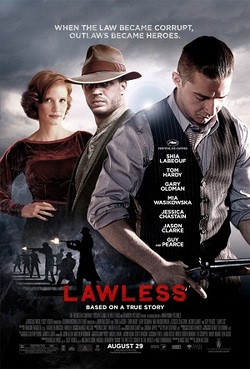 This film starring Tom Hardy and Shia LaBeouf, is about the Prohibition Era and is set in Franklin County, Virginia which was known as the Wettest County in the world.  The film centers around 3 brothers Forrest (Hardy), Jack (LaBeouf) and Howard (Showtimes Brotherhood’s Jason Clarke) who run a bootlegging liquor business.  Jack falls for a Menonite Preachers Daughter, Howard is a drunk and Forrest is the leader of this band, he has a reputation as being Immortal.  Jessica Chastain plays the lovely Maggie Beauford and Guy Pearce is at his evil best playing Special Agent Charlie Rakes.  He truly is a sick bastard in this film.  Gary Oldman portrays Floyd Banner but I honestly believe this was a wasted role for someone that is as good as Oldman.  I enjoyed this film and found it rather graphic at times, which I am a big fan of.  If you are a fan of Prohibition Era drama’s, then this should be your cup of tea.